April 3rd 2016 Prophetstown one more time, only this time the sun was full in, for what started out to be a crisp early April day in the Midwest. Later warming up into the lower 70's and becoming a little windy.

Adam Bonneur checked in a little late in the morning and only got one practice lap in but seemed pretty relaxed and happy with his Fun Mart Suzuki 450z.

The Adult racers were split up into two separate races once again, with over 100 adult bikes signed up. In the later of the two races Pro/A rider Logan Housenga grabbed the hole-shot over Jarrett Ruchotzke and Adam Bonneur.

Logan Housenga ended up second Overall as he had to come back, and make up ground after battles with Bryan Johnson and Keith Zaagman. 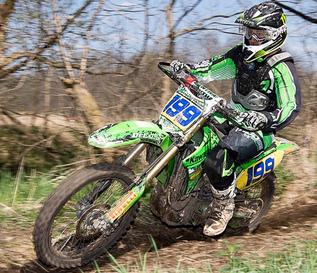 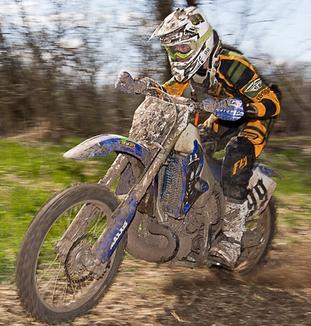 Jarrett would go down and cause a bottleneck, as Logan, Adam and Logan's younger brother Braden were able to make a break for the woods. After 1 lap Braden Housenga put his KTM into the number one spot with Bonneur in tow,  Adam even gave Braden a love "poke" at the scoring barrels. Logan came in after 1 lap in third just a second or two behind Bonneur. The joke was Adam was the mayo and mustard between a Housenga sandwich (with Adam's white gear and yellow bike). On lap two Adam quickly made sure he was not in a sandwich and made work of his understudy Braden and took the lead. Braden stayed with Adam as long as he could but that would be the finishing order for the Pro/A class. Bonneur, B. Housenga second and Logan Housenga third.

The A class was stacked as well, with Cole Zuidema taking the win over Benjamin Schmidt on his 450 Husky. Cole ended up fifth Overall catching several Pro/A riders on his way to a steller day.

Buddy Fortune followed up Cole's performance with the same type of ride winning the Open B class aboard his trusty KX 100. Buddy caught up to the A riders after about 3 laps and moved up through the group of A riders to 12th Overall.

photobyjohn.com for the rest of John's pic's. Don't forget to order a printed photo from John or have one printed off at the track at your convenience!

​​​King of P-town returns to his court

Barnes in a surprise ending 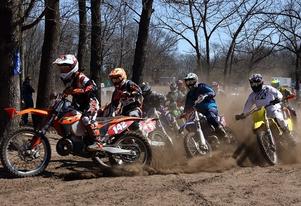 The Pam Bush Memorial race weekend started with me laying out trail in the best possible weather, and I kept thinking there is no way this will hold out for the weekend. But to my surprise Sat and Sunday were two of the best days we have had in a while for racing.

Sat kicked off the weekend with 60 plus riders showing up for the Pam Bush Memorial play ride. All entry fee money's going to a great local charity Make Teal Real. A lot of fun and a ton of friendly fellowship throughout the entire day, right through the Charlie Johnson prepped hog roast at 6pm.

Sunday kicked off with picture perfect weather for race day.  The faces were just a little more serious Sunday morning as the racers were just a tad bit more amped up for the Pam Bush Memorial race. Especially Adam Bonneur and Cody Barnes, Adam.. who hasn't been able to participate in the first two Pam Bush races due to scheduling conflicts was looking to put his name on the traveling trophy finally. Cody.. who has been riding very well this year and with 2 Overall's in his back pocket already was looking to notch one more at rd 4.

As the morning classes wound down, the start of the Pro/A race neared. After the Pam Bush Memorial group photo, the riders were told to warm up their bikes. Braden Housenga's KTM fired first and he reached the creek jump leading the way of the Pro/A riders into the swamp. Braden collected the Gary Gibb's sponsored Obrien 100 dollar holeshot award in the process!

Braden would relinquish his lead midway lap one to Cody Barnes in a field crossing. Cody had his eyes set on the nearing timber when Adam Bonneur passed by on his 450 Suzuki. Adam would extend his lead to 30 seconds before clearing the woods on the "north side" of the property and entered the corn stubble maze. Adam would extend his lead to 4 minutes by the white flag lap at 87 mins, only to run out of gas on the back section of the course after a near flawless ride. Cody who kept his head down and raced the entire race despite being down a bit was the recipient of Adam's misfortune and came in grabbing the checker flag after 99 mins of racing.

Cody was not happy with the win at first because of the circumstances and seemed to refuse any praise, but it was a deserved win in the end. That's off road racing and you have to keep charging to the end no matter what in this sport, because you never know what is going to happen.

March 6th 2016 Rd 1 turned out to be a nice late winter day with high's hovering 50 degrees and sun in the morning. 241 entries made for a packed P-town parking lot.

Cody Barnes set sail towards his RD 1 win by getting a decent start, Austin Well's checked in after one lap in the Prophetstown sand in first place. Cody (not far behind) took advantage of what looked like a mechanical failure of some sort on Austin's bike. Colt Converse held on to second as long as he could before Adam Bonneur moved up to the 2nd place position, meanwhile Cody was taking full advantage of clean air and track opening up his lead to 30 seconds over Adam. Adam (now aboard a Fun Mart Cycle 450 Suzuki) made a mid race move to get with in 15 seconds of Cody but then dropped back a bit after a extended pit stop. Cody would end up claiming the win with a rather large gap over second Adam Bonneur, Colt Converse put his Yamaha on the podium in third place followed by Wisconsin's JD Friebel in fourth and Bren Raschke grabbing fifth with a last lap pass on Braden Housenga.

Riley Brueggeman made the trip north to take the Overall ATV win over Ben Burds.

Several Pee-Wee's kicked off the action at rd 1 with Levi Fortune and Cameran Lindon claiming wins in their respective classes.

Buddy Fortune claimed another Overall win in the Mini race, over 20 other mini riders.

Wally Mika took the Overall the morning adult race from the Master's class.

Cole Zuidema would claim another A class win over Sam Hammelman (second), and Chuck Garetson (third).

What a great weekend and we want to thank all who came out and supported a growing event. Lets keep the momentum going and make the 4th Annual even bigger and raise more money for Ovarian cancer awareness.

Barnes comes from behind 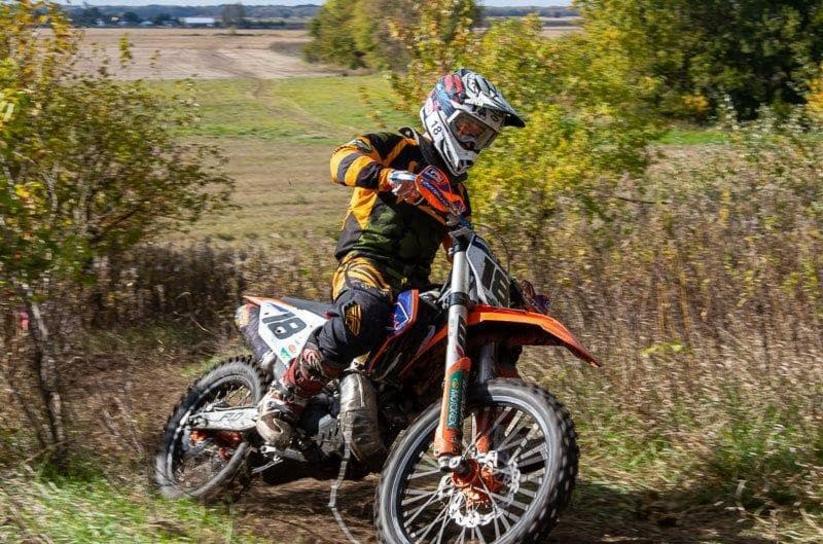 March 20th 2016 ​Rd 2 was co-sanctioned with the IERA Association. The bikes were split into 2 separate races, basically the C riders raced at noon and the Pro A and B riders started around 2pm.

​The main event saw Stan Gregory grab the hole shot on his #19 Yamaha, followed by Cody Emery just after crossing the lane and into the woods. Jason Protiva, Braden Housenga and Stephen Willis also gave close chase along with 14 other Pro riders. Rd 1 winner Cody Barnes suffered a terrible start and was back around 15th.

​Race leader Stan Gregory fell on the sand hill and gave the lap one lead up to Cody Emery, Cody would come through the lap 1 scoring tent holding down the lead, with Braden Housenga tucked behind him.

Braden would make his move on lap 2 and take the lead, meanwhile Cody Barnes was moving up fast through the pack and now put himself with in sight of the leaders. Braden held the lead for a couple laps before Cody Barnes put his Fly racing G2 YZ 250 in the lead. Cody Emery was in third before his YZ "blew up" and Cody would have to push her back to the pits.

​Cody and Braden had a nice close battle till the very last lap when Braden fell off the pace a bit and finished second. Stephen Willis ran in third most of the day and closed in on Braden on the last lap finishing 3rd. Keith Zaagman ended up 4th, and Matt Dissell 5th.

​Congrats to Cody Barnes on a well deserved win and the Overall $300.00 purse and $100.00 store credit at Prophetstown Cycles.

​The Open A class was tightly contested between Beau Malcom and local rider Cole Zuidema, Beau would take the win by 1.5 minutes at the checkers after Cole had some high rev throttle issues on the final lap.

​Tobin Miller over alled the noon race on his KTM, Jaxen Driskell was 2nd. and Kevin Halloran 3rd.

​Tommy (Buddy) Fortune won the stacked 85cc class then went on to win the 19 rider B class over Tim Buckley.

​Congrats to all the winners!